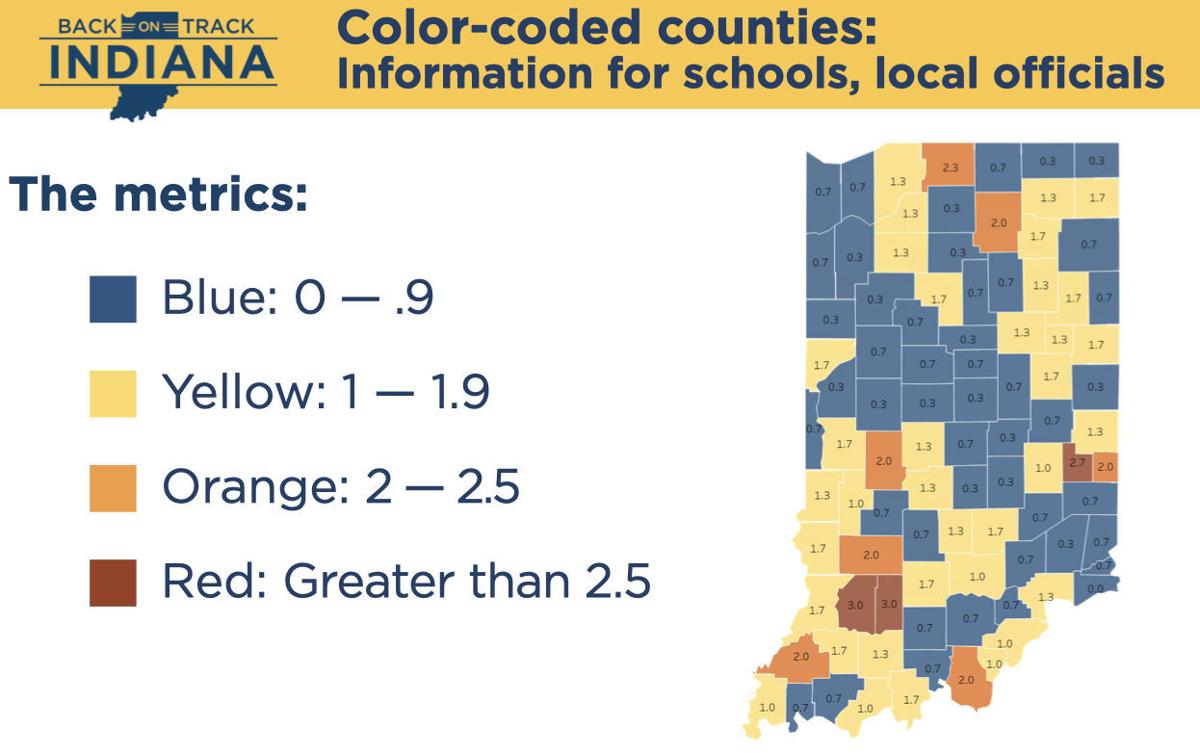 Indiana is launching a new indicator map with the hopes of helping Hoosiers quickly identify whether COVID-19 is under control or spreading more widely in their counties by using a new color-coded map based on a three-category rating system.

The Indiana State Department of Health will be using this scoring metric to help determine ratings for counties on a new indicator map being developed to make it easier to identify places where COVID-19 may be more active.

Indiana is launching a new indicator map with the hopes of helping Hoosiers quickly identify whether COVID-19 is under control or spreading more widely in their counties by using a new color-coded map based on a three-category rating system.

The Indiana State Department of Health will be using this scoring metric to help determine ratings for counties on a new indicator map being developed to make it easier to identify places where COVID-19 may be more active.

INDIANAPOLIS — Gov. Eric Holcomb is making no changes in the state’s reopening plan, holding Indiana in the same place for another 30 days.

Last week, Holcomb announced that Indiana would remain in Stage 4.5 for another 30 days and that he would also extend the state’s mask mandate for the same period.

And starting next week, Hoosiers will have a new map to help them more easily figure out whether COVID-19 is currently on the rise or not in their county.

Indiana has been in Stage 4.5 since July 4, when Holcomb created it as a half-step between Stage 4 and Stage 5, full reopening, due to some then-early signs of COVID-19 rising again after being in decline throughout May and June.

The mask mandate, requiring all Hoosiers to wear a face covering when in indoor public places and outdoor spaces where social distancing isn’t possible, went into effect on July 27.

Despite announcing he would extend the reopening stage and mask mandate, Holcomb said the 30-day extension is coming on the heels of some “encouraging signs” in recent weeks with the state’s COVID-19 numbers.

Indiana’s COVID-19 data has leveled off since the last time Holcomb held over the state’s reopening stage on July 27. Daily case counts hit around 1,000 cases a day for several days in early August, but those numbers have fallen off slightly since.

Likewise, Indiana’s positivity rate has decreased a bit, dropping from 7.6% on July 27 when the mask mandate went into effect to 6.6% as of Aug. 19.

“On one hand, we’re pleased we’re holding steady,” Holcomb said, but adding there’s more to do. “We don’t want that to trend up, we’d like to see it trend down even more so.”

Indiana State Health Commissioner Dr. Kris Box noted that progress is being made and that although case counts have been high, positivity has been showing improvements and that areas that are abiding by precautions closely generally are doing better than areas that get lax things like masking and social distancing.

Box also reported that contact tracers, of which there are now more than 1,200 in the state seeking to track back new cases and possible exposures, are reaching about 76% of people affected and completing an interview, a slight decrease from 80% a month ago.

That’s better than the national contact rate of about 50%, but Box said tracers still want to reach those last 1-in-4 people to get information and help stem the spread.

Also Wednesday, Box announced the upcoming launch of a new statewide map that is aimed at helping general Hoosiers, school officials and businesses more easily identify what the COVID-19 situation in their county is and whether they need to consider making changing to their approach.

The new color-coded indicator will include a four-color legend showing whether recent statistics suggest that COVID-19 is mostly under control or is perhaps spreading more widely in the county.

“The goal is to provide an easy to understand system that local and school officials can use to inform their decisions,” Box said.

The map will feature four levels — blue, yellow, orange and red — based on the average score of a three-category rating system.

• New cases per 100,000 residents — This per-capita rate will adjust for population and indicate how widely new cases are being found.

• Change in positivity — Lastly, the state will score counties based on the change in their positivity rate from the week before, which would show whether a greater or lesser proportion of tests are coming back positive.

The state will then take those three individuals scores and average them, with the result being assigned colors — blue for 0-0.9, yellow for 1-1.9, orange for 2-2.5 and red for 2.5 and higher.

“These specific metrics are part of metrics from the CDC and HHS and that’s why we’ve chosen these. This is a way for counties to start to see where they are in relation to other counties,” Box said. “It’s a week-by-week look for county officials, public health and Hoosiers all over the state to keep track of.”

Although the map doesn’t launch officially to the public until next Wednesday, Box did display a sample of how it would look based on current levels. In that image, LaGrange and Steuben counties currently were blue, while Noble and DeKalb counties were in the yellow.

These ratings are informational only and do not trigger any mandates or requirements via the state, Box said, and the numbers and ratings will change from week to week as the situation changes.

“These metrics change, a county that is in red today won’t necessarily stay there if people take the right steps,” Box said, stating wearing masks, practicing social distancing and staying home if sick or exposed are the best practices to follow. “The best way to get counties into blue and keep them there is for every Goosier to make the choice to protect others.”

While the new rating system is not tethered to any requirements, Box said there are some guidelines to consider as counties change rankings.

In the blue and yellow, those ratings suggest low community spread, in which schools can likely operate safely and run public events such as sporting events. As schools enter the orange and red, however, they may want to consider a shift to hybrid or virtual learning for schools and start restricting access to or canceling extracurricular activities, as well as discouraging other social activities outside of school.

Box specifically noted that what happens outside of school is often being found to be a cause of transmission.

“We continue to see many of our cases associated to sleepovers and parties outside of school but with school friends,” Box said.

Holcomb indicated that the new rating system is not a singular approach, it’s not the sole indicator being used in decision making, but that the new map is meant to be a tool to assist people to get an easier read on what the situation may be in their back yards.