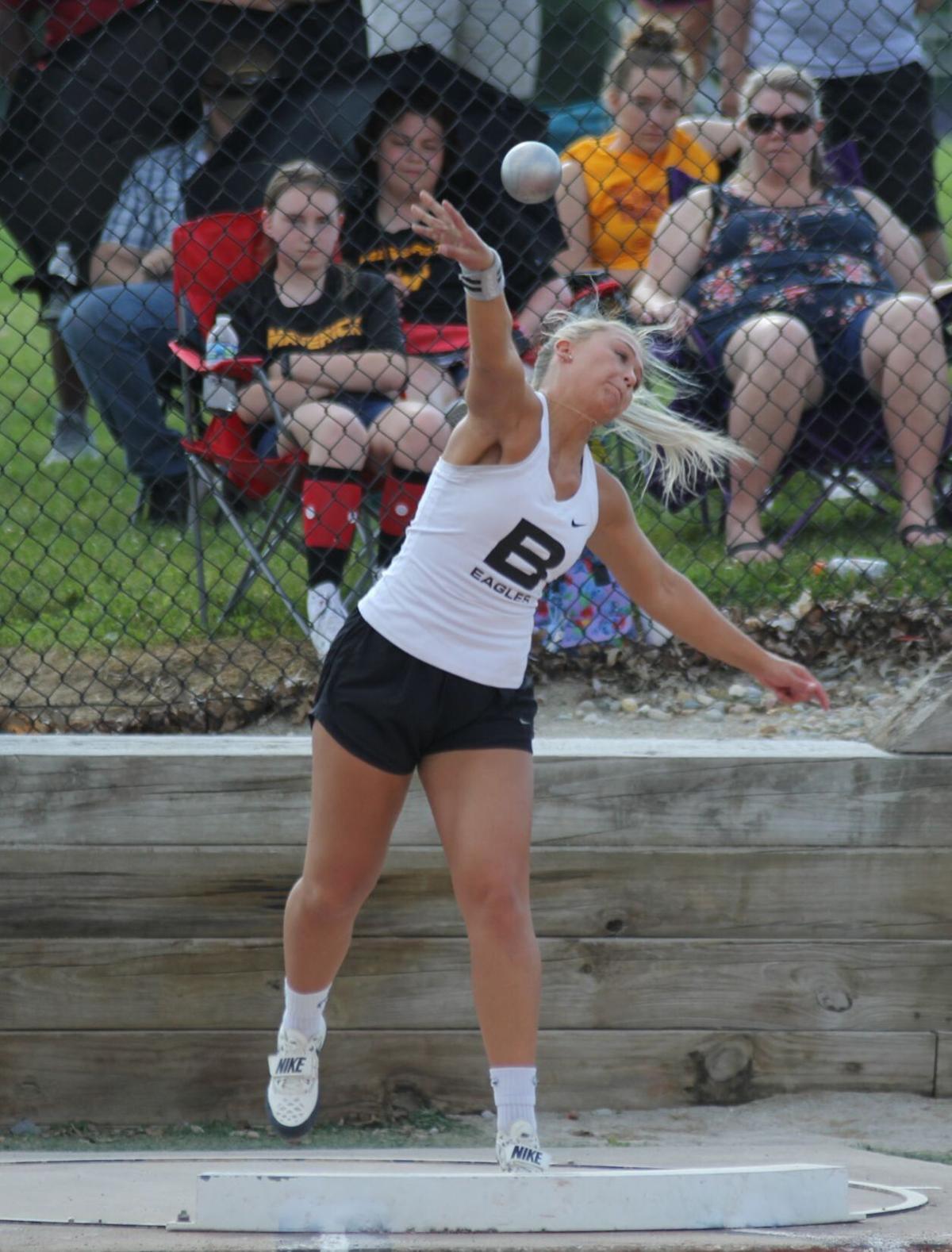 Churubusco’s Kilah Smith was named the KPC Media Group All-Area Girls Track and Field Prep of the Year for 2021. 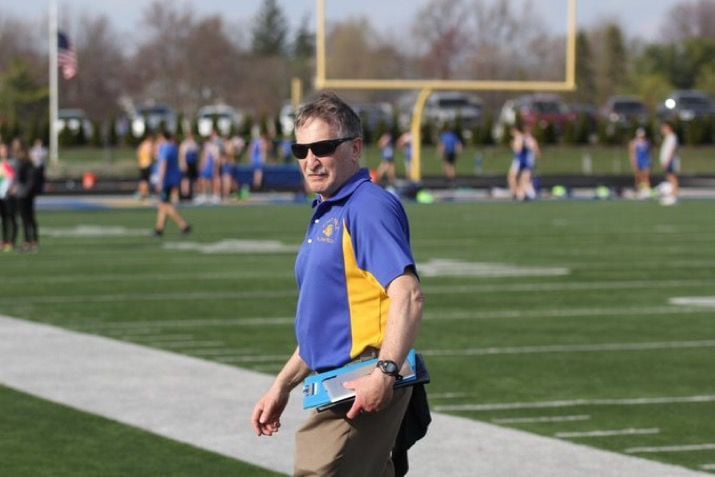 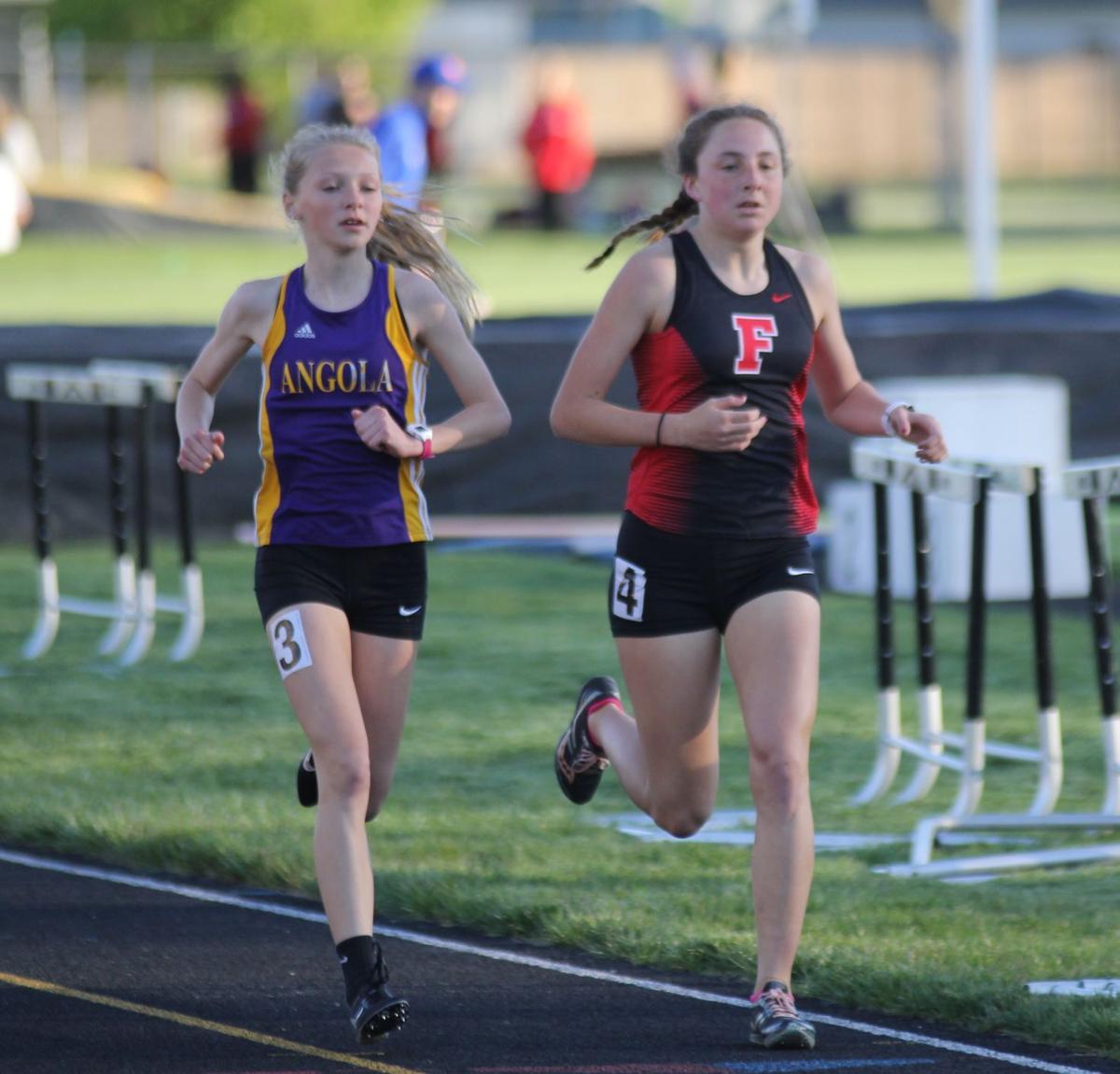 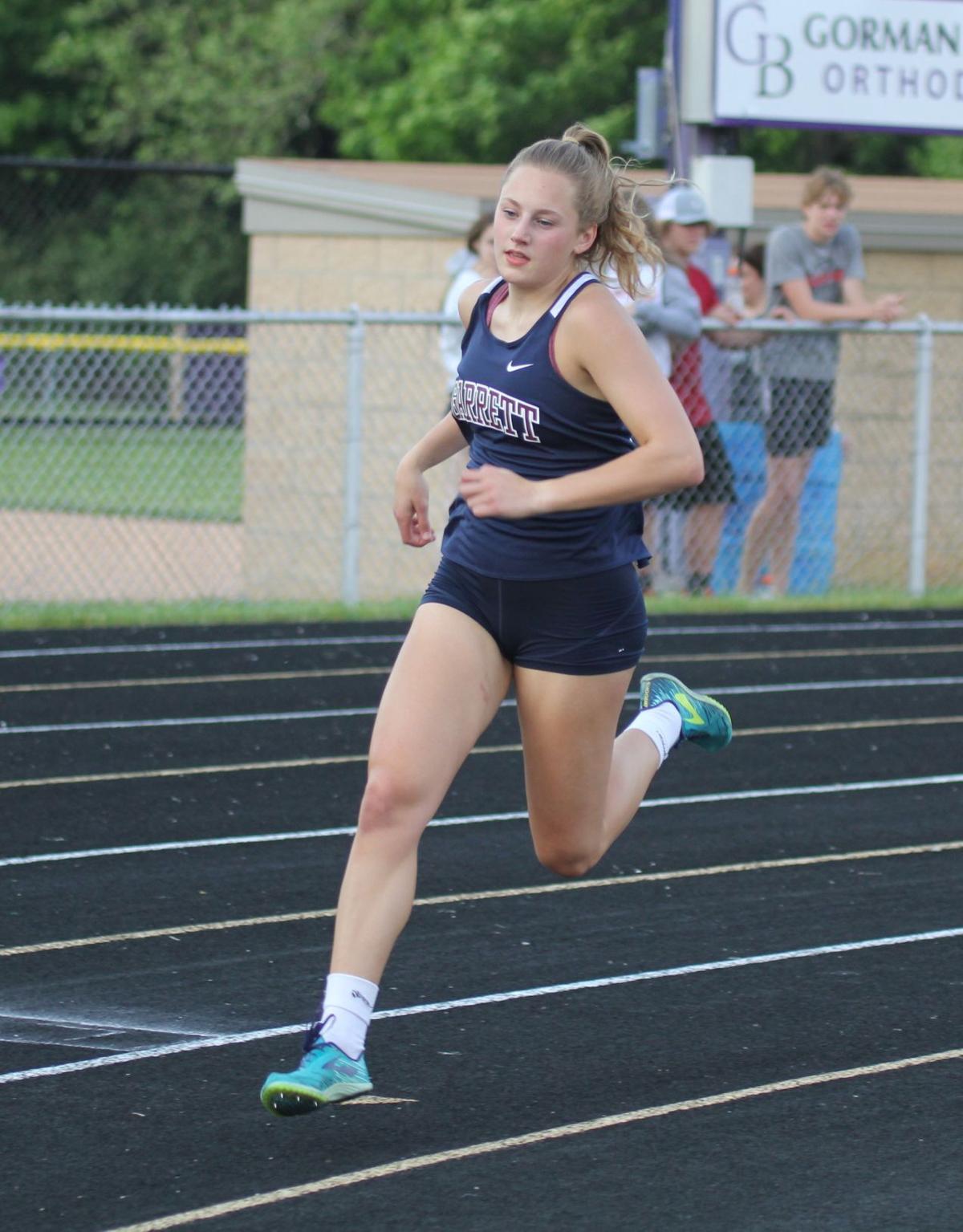 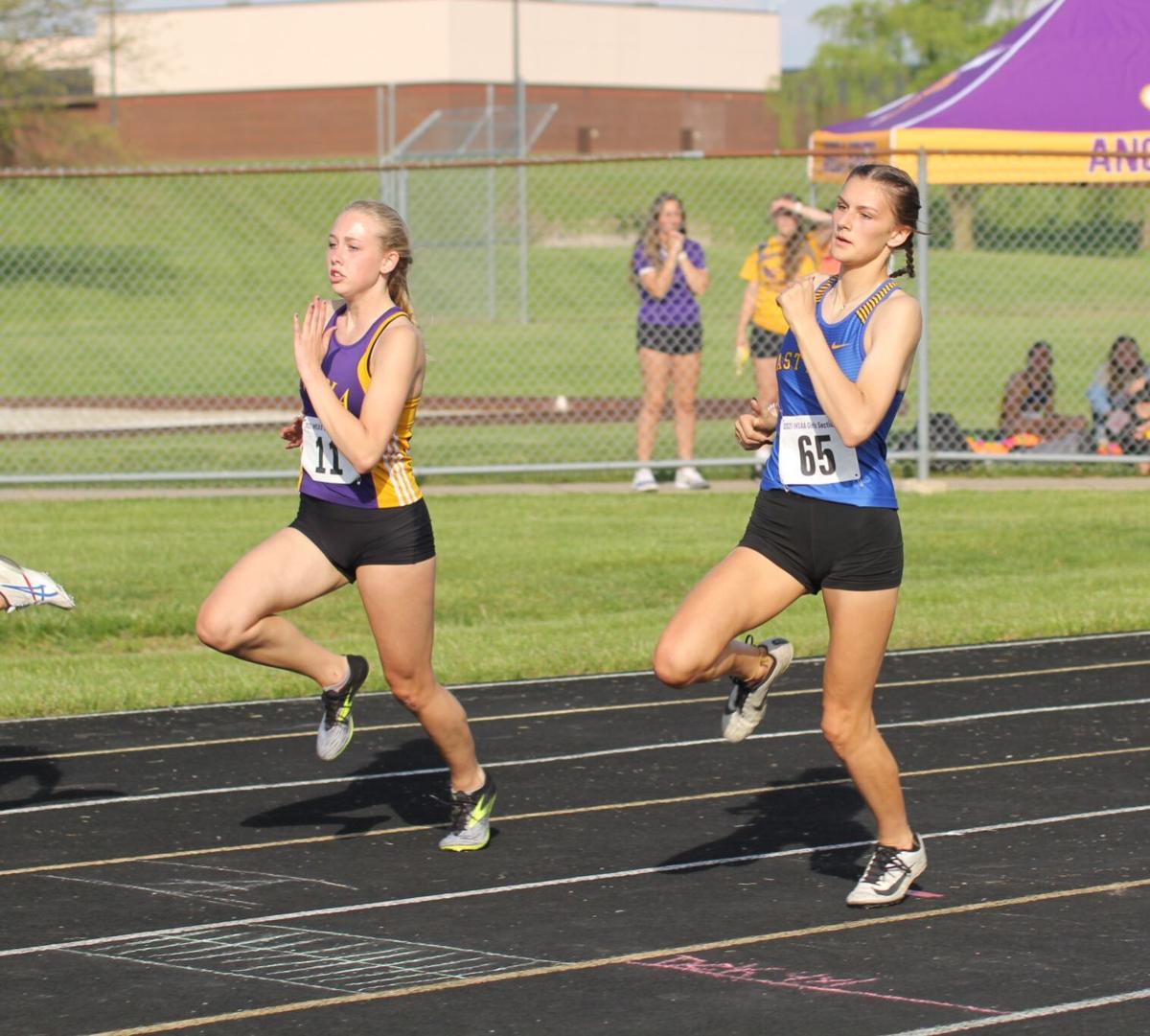 Churubusco’s Kilah Smith was named the KPC Media Group All-Area Girls Track and Field Prep of the Year for 2021.

Both the KPC Media Group All-Area Girls Track and Field Prep and Coach of the Year went out on a high note.

Churubusco senior thrower Kilah Smith finished her prep career by making it to the IHSAA State Finals at Ben Davis High School in Indianapolis and placed in the top 20 in both the shot put and discus. She is the 2021 KPC Media Group Girls Track and Field All-Area Prep of the Year.

On her way to the state finals, Smith blazed a path that no one was going to get in the way of. She was the sectional champion in both events at the Northrop Sectional, giving her a second sectional win in the discus.

At the Marion Regional, Smith also claimed titles in both events and broke the school record in the shot put with a throw of 42 feet, 8 inches.

She didn’t have her best day at the state finals. Smith narrowly missed the podium in shot put with her 11th-place finish. She ended in 17th in the state in discus.

East Noble’s Andy Bell wrapped up a successful coaching tenure of 38 years this season and went out a champion. His Knights earned their third straight sectional championship at Angola, and he had two individuals and one relay team qualify for the state finals, all of which made this year’s all-area team.

Bell became the girls track coach in 2007 and since then, the East Noble girls won five sectional titles and had plenty of girls qualify for the state finals.

The Knights also earned one last win at the John Reed Relays for Bell and placed fourth in a competitive Northeast 8 Conference meet.

Forker led the team in points for this season’s East Noble squad. She was a state qualifier in long jump and was part of the 4x100-meter relay team that made it to Indianapolis. In the long jump, she finished 11th at the state finals, was third at the Marion Regional, the Angola Sectional champion and runner-up at the NE8 Meet at New Haven.

Also at the Angola Sectional, Forker anchored the Knight’s winning 4x100 relay team, won 200 dash and finished second in the 100.

Garton was a state qualifier in the pole vault for East Noble. She was the event champion at the Northeast 8 and sectional meets. At regionals Garton was the runner-up. At Ben Davis, she placed 17th but ended up breaking her own school record with a jump of 11 feet, a record she broke multiple times on the way to the state finals.

Becker finished off her East Noble career as the second-best point-earner. She was the leadoff runner on the sectional champion 4x100 relay team that made the state finals.

Fleck was a part of East Noble’s state qualifying 4x100 relay team. The quartet placed third at the Marion Regional in a school-record time of 50.17 seconds, which broke the record that was set back in 1987.

The group was the sectional champion and third at the NE8 meet.

Hudson was a part of East Noble’s state qualifying 4x100 relay team. The quartet placed third at the Marion Regional in a school-record time of 50.17 seconds, which broke the record that was set back in 1987.

The group was the sectional champion and third at the NE8 meet.

Armstrong made her way onto the all-area team after she qualified for the state finals in the 400-meter dash. She advanced to state after a huge comeback win at the Marion Regional. She chased down three other girls on final stretch, passed them all and won the event in 1:00.29.

At the state finals, Armstrong finished in fourth in the first heat of the 400 dash with a time of 1:00.63. Her time ended up being good enough for 20th overall. She was sectional and conference runner-up in the event.

Hinkley was a dominant force in the distance events this spring. She won the 800, 1,600 and 3,200 races at the NECC meet and the Angola Sectional.

At the regional, she just missed qualifying for the state finals in two of the events. She placed fifth in the 1,600 and seventh in the 3,200.

Hinkley was also on the 4x800 relay team that won at conference and qualified for regional. She won the mile and two-mile at the New Haven Relays as well.

Caswell was a major asset to the Hornets in her first year of track. She finished with a 10-2 record in 400-meter dash and had a personal record of 60.56 seconds. Caswell ran on 4x800 relay team that won at the NECC meet and was second at sectionals. She also anchored 4x400 relay team and had several splits under 60 seconds.

Gaerte was another freshman that helped the Hornets score a lot of points in the high jump. In the event, she was the conference runner-up and the sectional champ. She personal record for the season was 5-4.

Ziegler holds the school record in the 300 Hurdles and was a part of the 4x100 relay record setting team.

Hosted was a special athlete for the Eagles in the spring season. While also playing softball, she was force to be reckon with on the track.

Shearer was another high-level contributor to Churubusco’s success this past spring. She won the pole vault at the NECC meet and was on the 4x100 and 4x400 relay teams that won conference titles. Shearer was also a regional qualifier in those three events.

Gannon was a bright spot for the Eagles this season. She was a regional qualifier in both the 1,600 and 3,200 after she was the runner-up at both the NECC meet and the Angola Sectional.

Zolman was the fastest girl in the area and proved that in her first season. She won the 100 at the conference meet and the sectional at Angola. She placed sixth in the event at the Marion Regional. She was also a regional qualifier in the high jump and long jump.

Malone was one of the best hurdlers in the area in 2021. She was the conference champion in the 100 hurdles and won both the 100 and 300 hurdles at sectionals.

Retting was right there with the area’s best in the high jump all season. She was third at the conference meet and tied for fourth at the Marion Regional with the likes of Zolman and Boersma. Her season-best was a jump of 5-3.

Winebrenner shined for the Barons in the distance events. She was fourth in a loaded 3,200 race at the Northeast 8 meet. Winebrenner finished third at the Angola Sectional, behind Hinkley and Gannon, but she ended up surpassing them both at the Marion Regional and finished sixth.