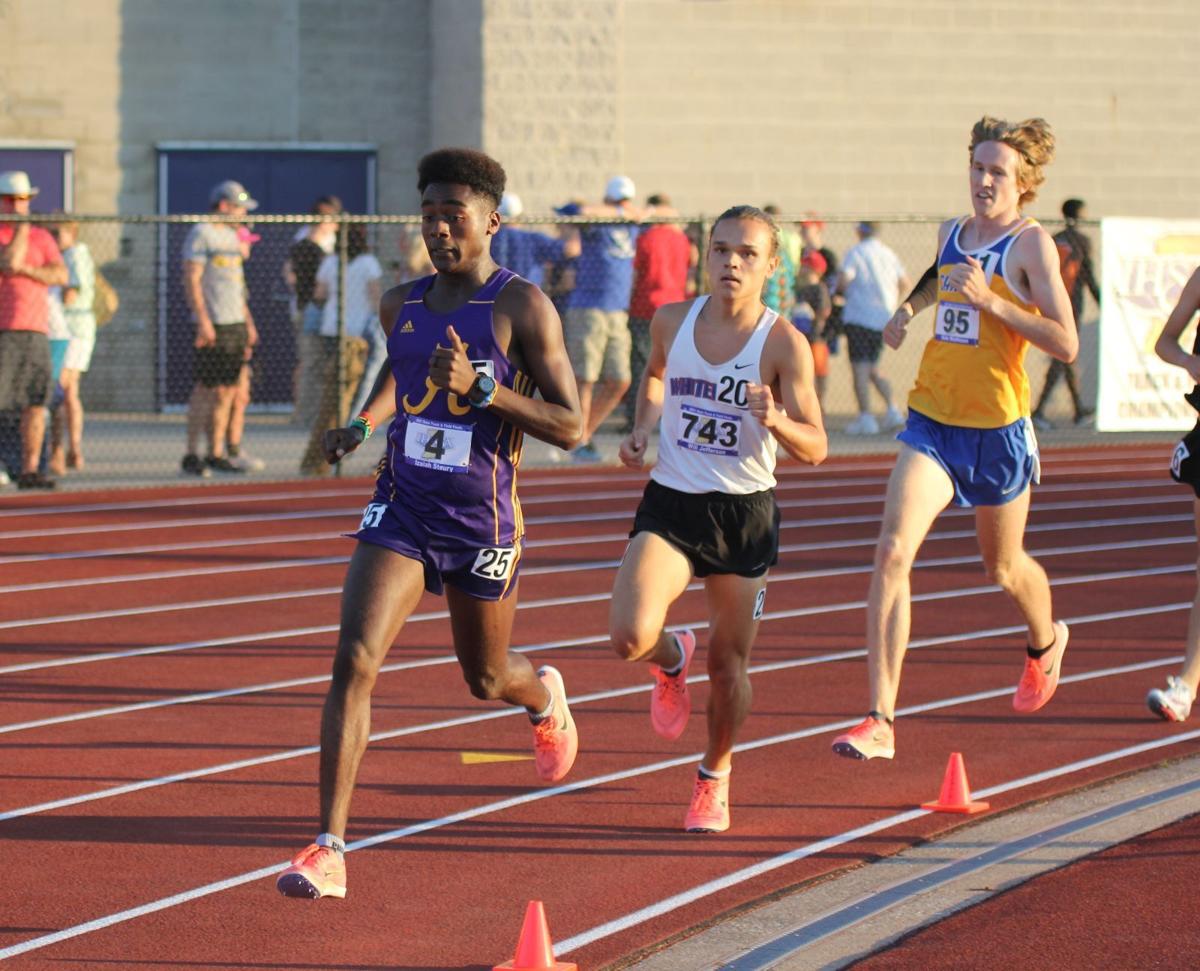 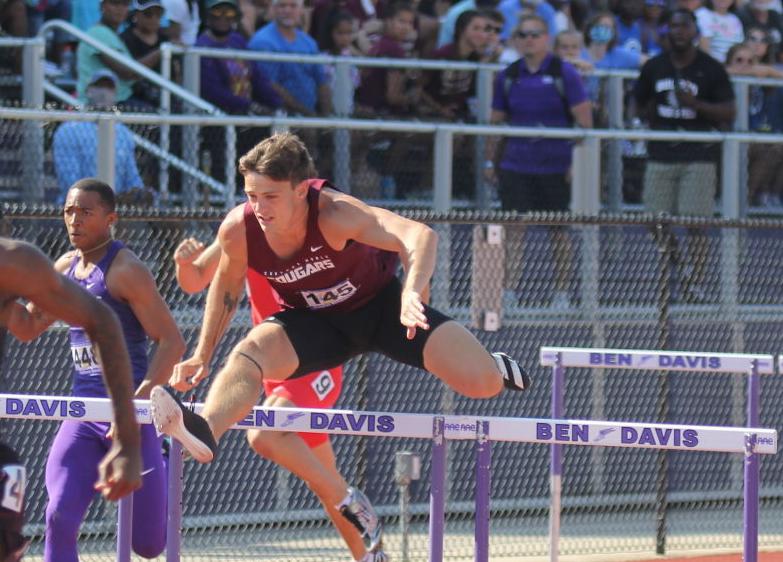 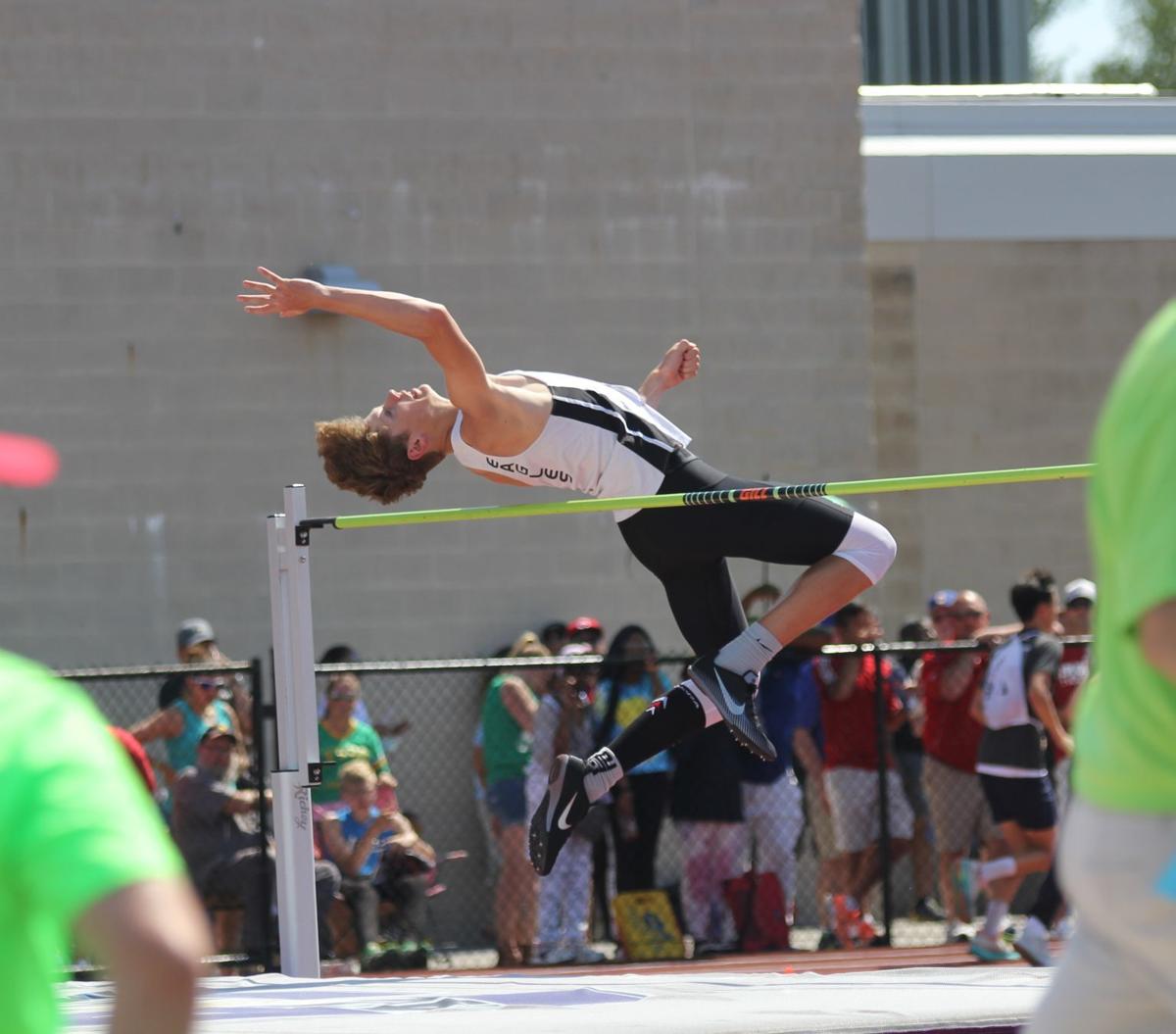 Churubusco’s Riley Buroff competes in the long jump at the IHSAA Boys Track and Field State Finals at Ben Davis High School in Indianapolis. The sophomore finished ninth overall in the 400-meter dash.

Churubusco’s Riley Buroff competes in the long jump at the IHSAA Boys Track and Field State Finals at Ben Davis High School in Indianapolis. The sophomore finished ninth overall in the 400-meter dash.

Angola went places it has never been to in boys track and field, like winning sectional and regional championships. And elite distance runner Izaiah Steury and coach Brad Peterson were big reasons why.

Steury is the KPC Media Group 2021 Prep of the Year, and Peterson is the area Coach of the Year.

Steury was part of a Hornet triumvirate, or big three, that has rarely been seen in this area on one team in any sport, if ever.

Angola was ranked as high as fourth in the Indiana Association of the Track and Cross Country Coaches poll, and ended up finishing 17th. Steury, Sauter and Macomber drew the praise and made Angola state title contenders by themselves, but it did not work out that way.

The big three became a big four with the emergence of sophomore Alex Meyer in the jumps at the Northeast Corner Conference meet, where he won both the high jump and the long jump on May 14 behind Angola Middle School.

Hard work and attention to detail were important for Peterson, Steury and the Hornets. Peterson said Steury runs 11 months out of the year. Many other athletes emerged in supporting roles.

Steury did not lose a 1,600- and 3,200-meter run all season until placing fourth in the 3,200 in the Indiana High School Athletic Association State Finals at Ben Davis High School in Indianapolis on June 4 in 9 minutes, 13.81 seconds.

Steury won regional, sectional and NECC championships in the 1,600 and the 3,200 in his final season of prep track and field for AHS. The junior also won sectional titles in the 800 and as part Angola’s winning 4-by-400 relay team at East Noble on May 20.

Another noteworthy win for Steury came on April 23 at the Carmel Distance Showcase, where he won the 3,200 in 8:55.07 and nipped Carmel sophomore Kole Mathison at the tape by five hundredths of a second.

Sauter overcame a hamstring strain late in the season to still reach the podium in the 110 hurdles at state with a seventh-place finish in 14.95 seconds.

Through the sectional, Sauter never lost a 110 hurdles race and only lost one 300 hurdles. He won sectional and NECC titles in both events. His 14.44-second run in the 110 hurdles at the East Noble Sectional set a new sectional record, beating the 14.47 set by EN’s Nathan Mueller in 2011.

Macomber was 16th in the discus and 17th in the shot put at the state finals. He set a school record in the discus with a personal-best throw of 162 feet, 8 inches in the Marion Regional to place second on May 27.

The consistent Macomber won sectional and NECC titles in both throwing events.

Meyer split his time between track and field and volleyball this past spring and burst upon the local scene by winning the high jump and long jump at the NECC. He was a regional qualifier in both of those events with third-place finishes in the East Noble Sectional.

Buroff reached the podium in the 400 at state by placing ninth in a school-record time of 49.69 seconds. He also tied for 21st at state in high jump.

Buroff was the Fort Wayne North Side Sectional title in the high jump by clearing 6-2. He also anchored the Eagles’ 4-by-400 relay team that won an NECC title.

Bianski just missed the all-state podium in the shot put by placing 10th with a throw of 54-4. He was the sectional champion and NECC runner-up in both throwing events.

Lantz was fourth in the 800 in the Marion Regional in a school-record time of 1:57.37. He missed a state berth by a hundredth of a second.

Lantz won NECC titles in the 800 and the 4-by-400 relay. He helped that relay team place fifth in the Marion Regional.

Nondorf was also part of that strong Eagle 4-by-400 relay team along with Buroff, Lantz and junior Dylan Stroder.

Nondorf was a sectional and NECC runner-up and placed seventh in the regional in the 110 hurdles. He was also second at conference to Sauter in the 300 hurdles.

Collins was the fastest boy in northeast Indiana by winning the 100-meter dash in the Marion Regional by a hundredth of a second. He followed up that 11-second sprint by setting a new school record at state at 10.85 seconds and placing sixth.

Collins was the Panthers’ leading scorer this past spring and also holds program records in the 200 and high jump and as part of the 4-by-100 relay.

White won the Fort Wayne North Side Sectional title in the 800 at 1:55.45, which was the 12th fastest time in the state this past postseason. He was fourth in the 800 at the regional.

White also holds school records in the 400 and with all three relay teams.

East Noble’s 4-by-800-meter relay (seniors Lucas Diehm, Kyler Corbin and Wesley Potts and junior Kayden Fuller)This quartet ran the fourth-best time in program history at 8:05.26 in the Marion Regional and placed third to punch a ticket to the state finals.

The relay team won a sectional championship, was second in the Northeast 8 Conference Meet and placed 14th at state.

Zolman was tied for fifth in the high jump and eighth in the 100-meter dash on his own and helped the Knights place fifth in the 4-by-100 relay at the Marion Regional. He also qualified for the regional in the 200.

Zolman was part of the EN sprint relay that won sectional and NE8 titles and ran the eighth-best time in program history in the regional at 44.13 seconds. He also won the NE8 championship in the high jump.

Kirkpatrick excelled in the 200, the long jump and both hurdles event for the Cougars. He overcame a foot injury for pretty much the second half of the season to make the state finals in the 110 hurdles. He was the regional runner-up and 14th at state in that event.

Brill struggled to clear 11 feet at the beginning of the season, but grew to where he cleared the bar at 13 feet at the state finals. That was good enough for 18th place.

Brill also was the East Noble Sectional champion and placed third at regional in the pole vault.

Gonzalez was 24th at state, third at regional and the East Noble Sectional champ in the 200. He was the sectional and NECC champion in the 100 before placing sixth in the regional.

Troyer rose above a talented group of area long jumpers to win a sectional title at East Noble with a leap of 21-3. He was third in the NECC Meet in that event and was also a part of the Lakers’ regional-qualifying 4-by-100 relay team.

Kelley’s lone school year at Fremont was very active as a three-sport athlete, also playing football and basketball. It was especially valuable this past spring in helping the Eagles develop a well-rounded team beyond their established distance program.

Kelley tied for seventh in the regional and was fourth in both the EN Sectional and the NECC Meet in the high jump. His season-best was 6-2. He also helped Fremont’s 4-by-100 relay place second at conference and qualify for regional after placing fourth in the sectional in 44.90 seconds.