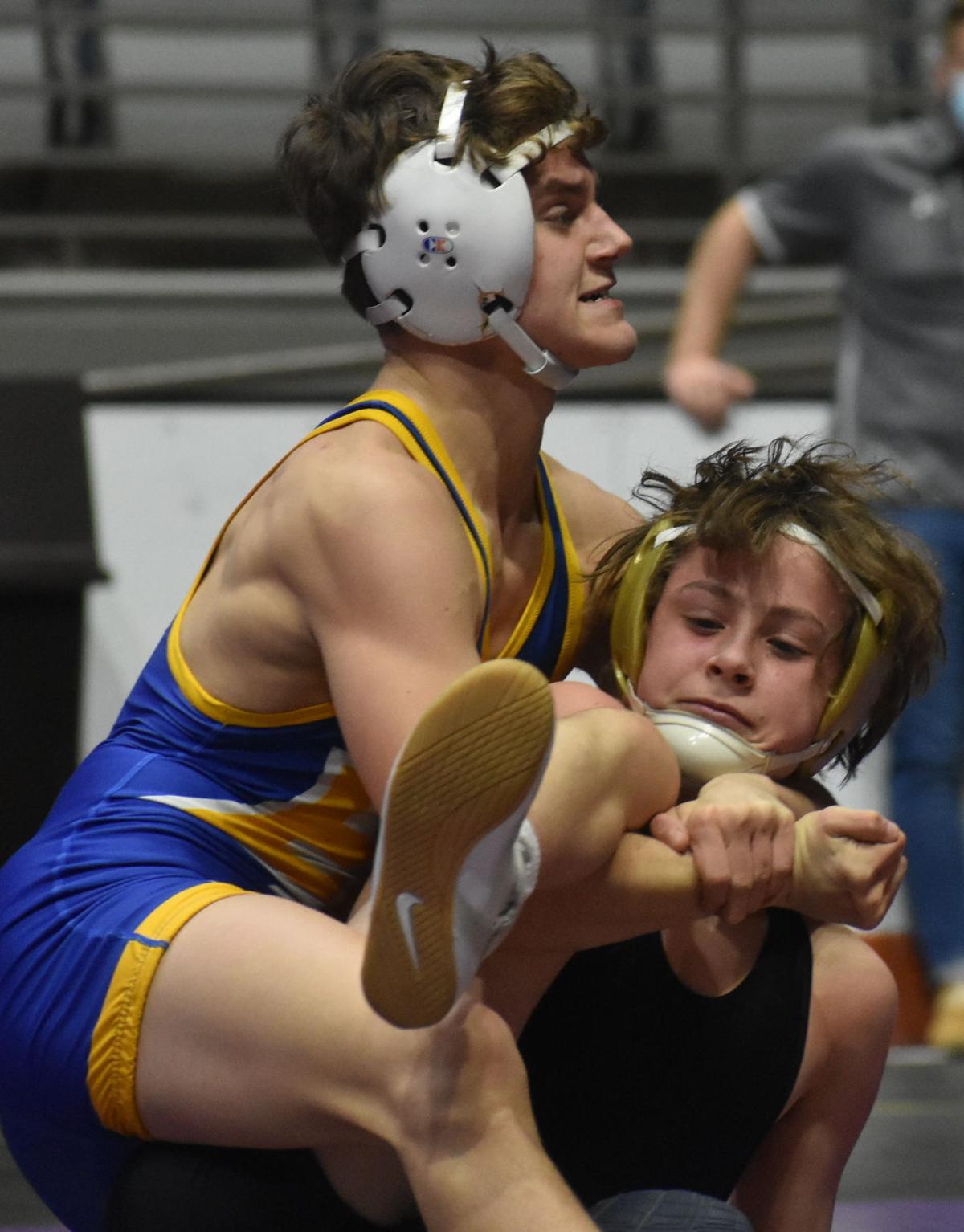 Aidan Sprague of East Noble tightens his grip on Silas Loshe of South Adams in a 120-pound ticket round match in Saturday’s semi-state. Sprague went on to win the title in his weight class. 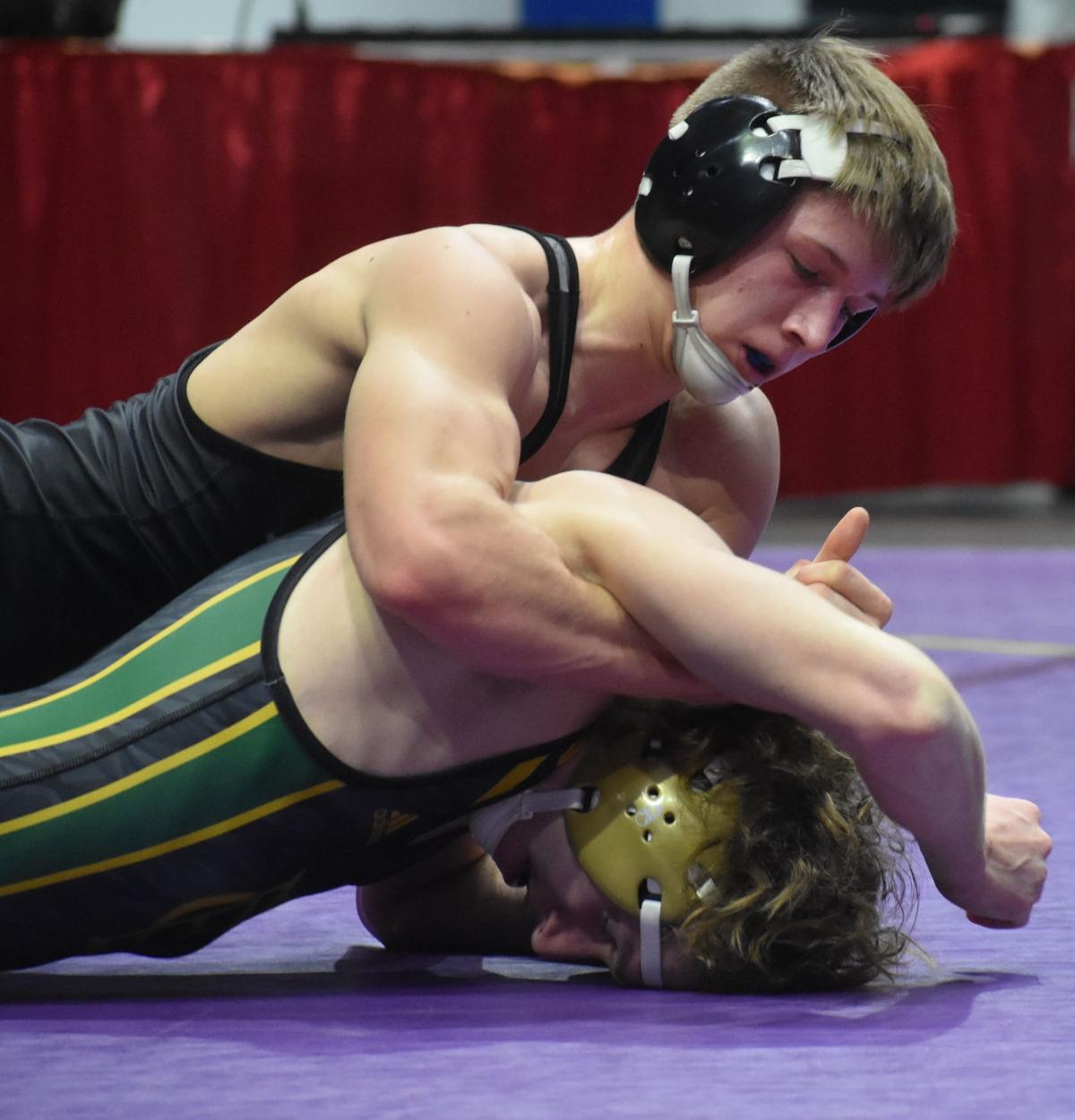 Prairie Heights 145-pounder Sam Levitz, top, has control over Eastern’s Luke Hetzner during the ticket round Saturday at the semi-state. 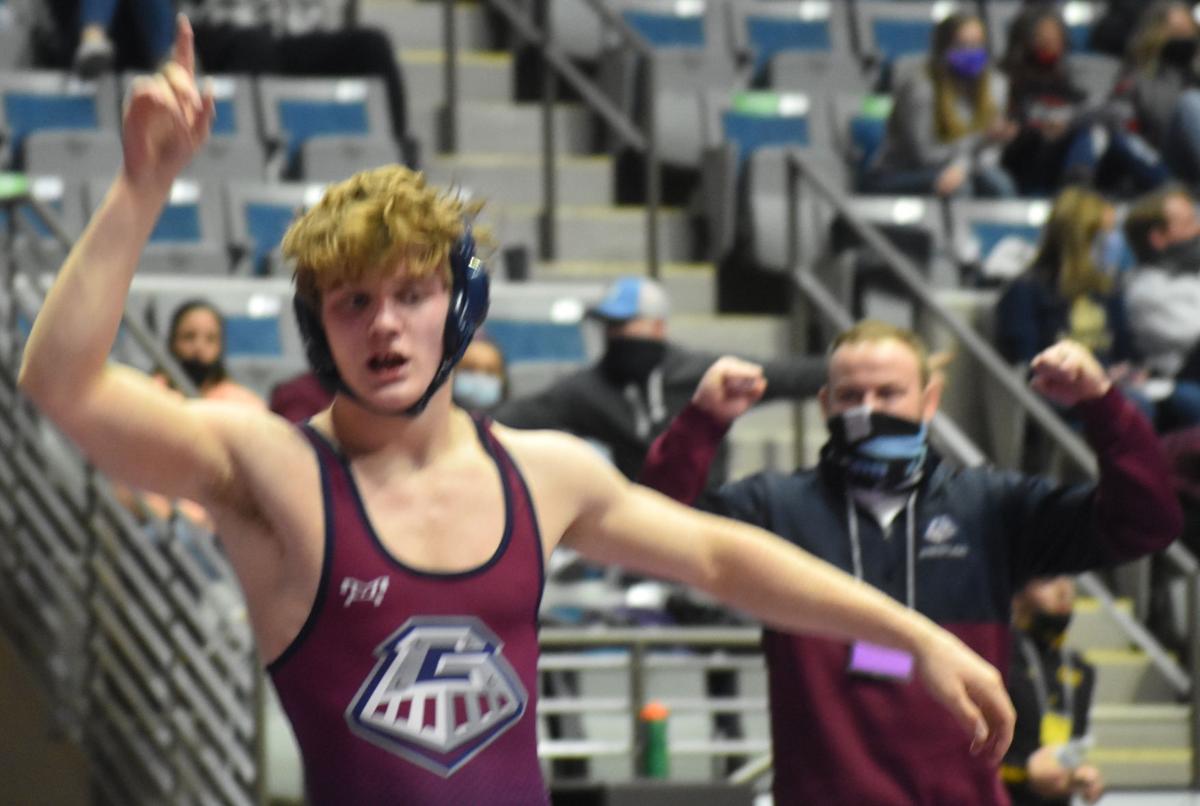 Garrett 152-pounder Chase Leech, left, reacts as his coach, Nick Kraus cheers after Leech won his match in the ticket round at Saturday’s semi-state. 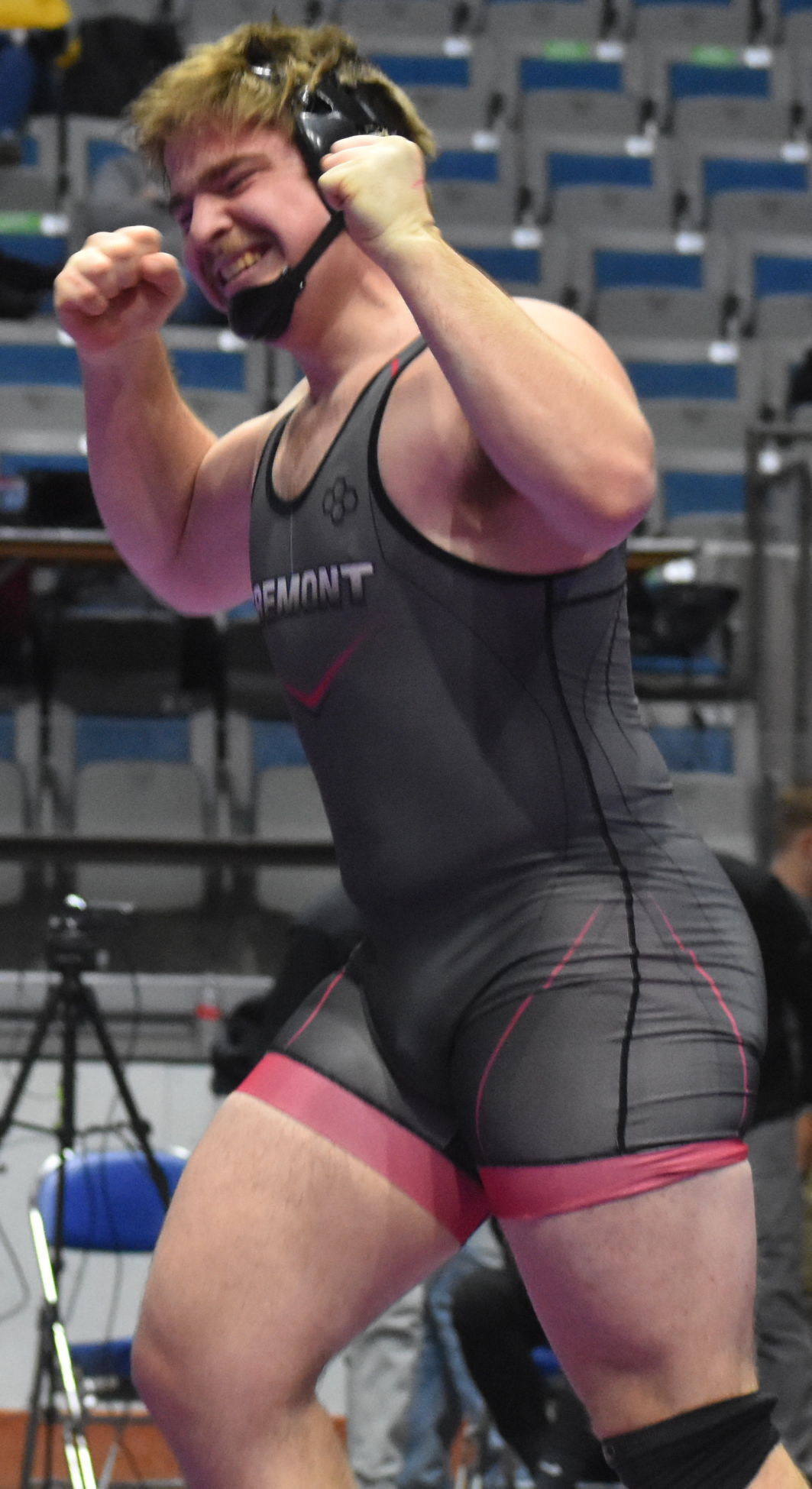 Aidan Sprague of East Noble tightens his grip on Silas Loshe of South Adams in a 120-pound ticket round match in Saturday’s semi-state. Sprague went on to win the title in his weight class.

Prairie Heights 145-pounder Sam Levitz, top, has control over Eastern’s Luke Hetzner during the ticket round Saturday at the semi-state.

Garrett 152-pounder Chase Leech, left, reacts as his coach, Nick Kraus cheers after Leech won his match in the ticket round at Saturday’s semi-state.

FORT WAYNE — Two Whitley County wrestlers are headed to this weekend's state finals after placing in the top four at last weekend's semi-state at the Allen County War Memorial Coliseum.

For Columbia City, Ian Clifford was semi-state champion at 220 pounds, wrestling his way to the title with five victories on the day.

First, Clifford topped Manchester's Gavin Mize 10-5, then DeKalb's Carter Miller 6-4. He beat Angola's Coy Brames in the next round, advancing to the finals where he took on Fremont's R.J. Dilbone, winning for the title.

Ryan Sheets made it past the opening round at 160 pounds, defeating Wabash's Grant Carandante by 7-1 decision, but fell in round two to Norwell's Eli Johnson, 9-2.

Jordan Driver lost his opening match to NorthWood's Connor Ratcliff by pinfall at the 1:35 mark in the 145-pound weight class.

Alton Mullinax lost his first-round match at 170 pounds to Delta's Lucas Fox in a competitive match that went to a tiebreaker.

Churubusco's Zander Hord was paired with semi-state champion Tanner Tishner from Western in the opening round. He was pinned at the 3:11 mark, ending his 2020-2021 season.

Imagine what East Noble's Aidan Sprague would have done if he was feeling good.

Sprague experienced severe cramping during his 120-pound semi-state title match at the Memorial Coliseum Saturday while locked in a tight battle with Tony Wood of Jay County.

After using nearly all of his injury time Sprague stuck it out, scored four points in the second period, then rejected Wood’s furious tries for a tying takedown at the end. He’d found a way to manage the pain with an 8-6 decision and a semi-state championship.

“He was cramping during the finals — his whole body,” East Noble coach Sam Riesen said. “He was able to fight through that to get the win. He has his sights set for big things next weekend. Winning (the semistate), he set himself up for a better chance to accomplish his goals (semi-state winners will face a fourth-place finisher from another semi-state in the first round at state).”

Sprague was one of three qualifiers for the Knights, the most among area squads. Jacob Graden was the runner-up at 170, while Keegan Malott earned his second straight trip to the big show with a fourth-place finish at 106.

“Three kids going to state, anytime you get one kid to state you’re pretty happy,” Riesen said. “We’re happy with how they came out and wrestled. They won some big matches.”

Regional champion Garrett had two state qualifiers, including Hayden Brady’s third-place finish at 113 to secure his second straight trip to Indy. Freshman Chase Leech is also going to state after placing fourth at 152.

Angola saved the best for last, qualifying wrestlers for state in the top two weight classes. Brandon Villafuerte was third at 285 and Coy Brames finished fourth at 220.

Fremont’s R.J. Dilbone was the runner-up at 220, and Prairie Heights will be represented at state by Sam Levitz, fourth at 145. The top four finishers from semi-state advance to state.

The state meet will be held Friday and Saturday at Bankers Life Fieldhouse in Indianapolis.

Graden was pinned by Snider’s Jacob Kreager in the 170 finals. His escape in the final seconds gave him a wild, back-and-forth 11-10 decision against South Side’s Matthew Morris in the ticket round (quarterfinals), and he decisioned Bellmont’s Duke Myers in the semifinals 8-5.

The luck of the draw was no more evident than at 106, with Malott paired against another returning state qualifier, Garrett senior Colton Weimer, in the ticket round. The two battled to a 2-2 tie through three periods, then Mallot scored the deciding takedown with 20 seconds to go in overtime.

“Colton finishes his career with over 100 wins and was a state qualifier (last year),” said Garrett coach Nick Kraus. “We know how the draws work at semistate. That’s just the breaks of the game sometimes. It was their day, not our day.”

Brady had his day again, winning a tough 2-0 decision against Ethan Holloway of Rochester in the ticket round. He lost a 15-3 major decision to repeat semi-state champ Isaac Ruble of Bellmont in the semifinals, but came back with a 4-0 decision over Northridge’s Beau Brabender for third.

Leech’s 9-5 decision over Wade Shafer of Rochester in the ticket round sent him on the road to Indy.

Prairie Heights put three of its six wrestlers in the ticket round. Levitz won 8-0 over Luke Hetzner of Eastern in the ticket round to book passage to state. He was pinned by senior undefeated repeat semi-state champ Elijah Chacon of New Haven in the semifinals.

“Getting one to Indianapolis is a big deal for us,” Heights coach Brett Smith said. “We’d have liked to have had three going down but the kids competed well dealing with everything that’s been going on. I’m definitely proud of the kids. Everybody we brought down were underclassmen.”

Dilbone lost in overtime to Columbia City’s Ian Clifford in the final after both wrestlers scored only an escape in the first three periods. Clifford scored the deciding takedown 16 seconds into the extra time.

“We forced the issue a little, and we ended up getting beat on that issue,” said Fremont coach Travis Smoker. “He’s a kid that goes 100 mph. He pushes the pace. It’s worked for us most of the year, but unfortunately, we had a little mistake in overtime. He’ll be all right.”

“The atmosphere kind of got to them,” Smoker said. “We live and learn. We’re still a very young team, we’re building.”

DeKalb’s Carter Miller had pinned Clifford at 220 in the finals of the Northeast 8 Conference meet, but was struggling with back problems Saturday and lost their ticket round rematch. Clifford then won 5-2 over Angola’s Brames in the semifinals.

All three of the Barons’ entries lost in the ticket round. A late reversal by Cameron Clark of Jay County put regional champ Braxton Miller on the wrong end of 4-3 decision at 132. Braylon Meyer lost at 106.

“It says a lot for our program to get three into the ticket round, including a freshman and a sophomore,” DeKalb coach Travis Gaff said. “Our middle school is doing well and we’re strong in the lower weights. The future is bright.”

Brames took care of Rochester’s Brady Beck in the ticket round before his loss to Clifford. Villafuerte pinned New Haven’s Jon Louden in the ticket round, then was pinned by previously unbeaten Braydon Erb of Western in the semifinals. He bounced back to pin Jacob Sommer of Elkhart for third place.

“We’re happy for them,” Angola coach Russ Tingley said. “They just kept getting better, and they’ve gotten better when you need to get better. They started to be more and more coachable. It’s a nice feeling.”