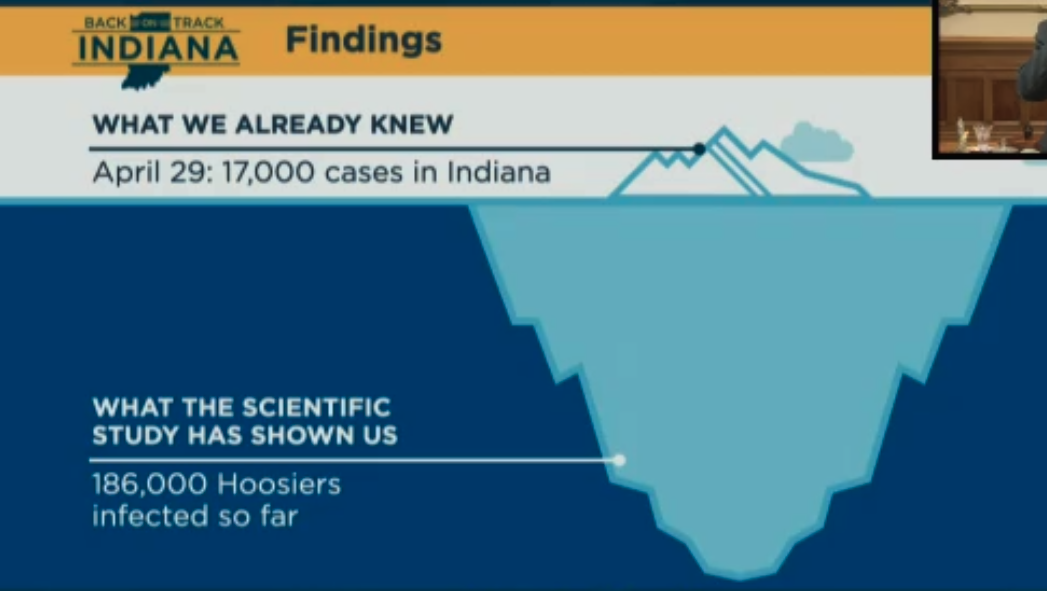 This slide from Wednesday’s statewide COVID-19 press conference illustrates the numbers of Hoosiers who are believed to have been exposed to coronavirus. 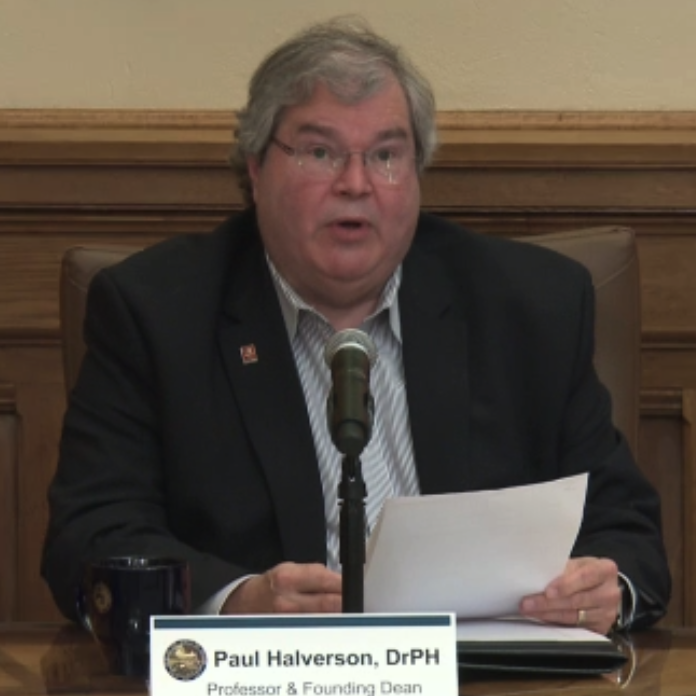 Dr. Paul Halverson, founding dean of the IUPUI Fairbanks School of Public Health, delivers information about how many Hoosiers have or have had COVID-19.

This slide from Wednesday’s statewide COVID-19 press conference illustrates the numbers of Hoosiers who are believed to have been exposed to coronavirus.

Dr. Paul Halverson, founding dean of the IUPUI Fairbanks School of Public Health, delivers information about how many Hoosiers have or have had COVID-19.

INDIANAPOLIS — The number of Hoosiers who have contracted COVID-19 is likely about 11 times higher than the number of known cases, estimated at about 186,000 people total.

Although that’s a significantly larger proportion of the population exposed that was previously known — it’s just under 3% of the state — health experts noted that the vast majority of Hoosiers have not yet come into contact with the virus and therefore should keep up safety precautions.

The study, conducted by the IUPUI Fairbanks School of Public Health, tested 4,611 Hoosiers between April 25 and May with both viral swabs to test for current infection and antibody tests for people who may have been exposed and already recovered without knowing it.

Founding Dean Dr. Paul Halverson said the study helps to show a wider scope of who might have had the virus beyond just symptomatic patients, since many people contract or carry the virus with little indication they have it.

“Almost all of the tests conducted in Indiana and the U.S. have focused on patients with serious symptoms or high-risk individuals,” Halverson said. “What these tests do not tell us is how many Hoosiers might be infected. COVID-19 can have many levels of severity, some people can have little or no symptoms at all.”

Short of testing of every Hoosier, which Halverson said is “not feasible,” random sampling tests like these can give health officials estimations that can help inform new decisions.

“We gain significant new knowledge about how the virus has affected the entire population,” Halverson said before turning over to his counterpart Dr. Nir Menachemi, chair of the health policy and management department for the Fairbanks school, to deliver the results.

Menachemi started by stating the results are preliminary, and although the results shouldn’t change much.

Taking that rate and applying it to the wider Indiana population, Menachemi said that would mean approximately 186,000 Hoosiers overall may have been infected.

At the time, Indiana had recorded only about 17,000 positive test results, so the random sample shows a much wider scope of infection than the state previously knew.

“The true impact of the virus was about 11 times greater,” Menachemi said.

With those new numbers of infections, Menachemi was also able to calculate a number that might reflect the true mortality rate of COVID-19.

Based on known cases, the about 5.8% of Hoosiers who had tested positive and were reported to the Indiana State Department of Health have died so far. But that number has always been a high-water mark, since health officials know that many more people either were not tested or were asymptomatic and never knew they had it.

This study and the estimated gives a better denominator of total infections to use, so Menachemi said the study’s calculation estimated an actual mortality rate of about 0.58%.

That’s still about six times higher than the typical influenza mortality rate, which is about 0.1%.

“It’s somewhere in the name of about 1 in 180 of people who are infected die,” Menachemi said. “It is not a necessarily we’re scot-free number. This is almost six times deadlier than seasonal flu, it’s asymptomatic and more infectious.”

About 45% of the people who tested positive for an active viral infection during the study reported no symptoms. Menachemi also highlighted that household members of people with an active infection were 12 times more likely to also be positive compared to the general populace.

Menachemi said the numbers show that Indiana’s stay-at-home policy and continued social distancing measures have helped to curb the virus.

But, at the same time, Menachemi noted that most Hoosiers — 97.2% — have not been exposed to the virus yet.

“The vast majority of people in Indiana have not been infected and represent the minimum pool of still-susceptible individuals,” Menachemi said. “We need to be extra vigilant with any and all safety precaution.”

Halverson echoed that sentiment, stating that until Indiana has a vaccine, there is still a lot of risk of transmission and infection in Indiana.

“We have to continue to be extremely vigilant with our social distancing,” Halverson said. “We have to assume that we have the virus and that everyone else around us does as well and act accordingly.”

Indiana State Health Commissioner Dr. Kris Box piled on too, building off Halverson’s sentiment that, for now, everyone should act as if they have it. That means wearing masks, social distancing and limiting contact as much as possible.

“We should all conduct ourselves as if we are infected,” Box said. “Please wear your masks, just in case you are one of those 45% of the people who are asymptomatic positive. ... That should underscore the importance of why you need to wear that mask and social distance.”

Halverson added that people are generally most infectious too right before they become symptomatic, meaning that people who feel good may be the most virulent carriers.

So what’s next? Fairbanks isn’t done, as it will now launch into “Wave 2” of its study, running a similar sampling to continue gathering more information.

The numbers from future phases will also help to inform whether the situation is changing — whether more people are being infected as the state reopens or whether mortality rates are changing — and provide new information to inform future decision-making.

This is almost six times deadlier than seasonal flu, it's asymptomatic and more infectious."